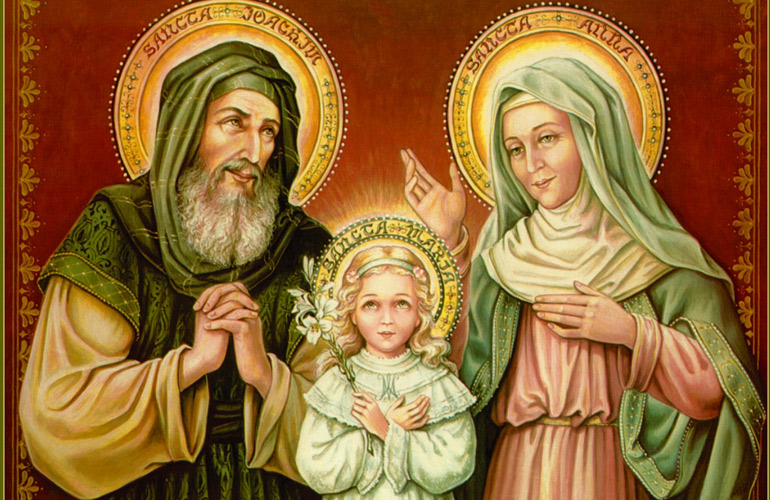 On July 26 the Roman Catholic Church commemorates the parents of the Virgin Mary, Saints Joachim and Anne. The couple's faith and perseverance brought them through the sorrow of childlessness, to the joy of conceiving and raising the immaculate and sinless woman who would give birth to Christ.

The New Testament contains no specific information about the lives of the Virgin Mary's parents, but other documents outside of the Biblical canon do provide some details. Although these writings are not considered authoritative in the same manner as the Bible, they outline some of the Church's traditional beliefs about Joachim, Anne and their daughter.

The “Protoevangelium of James,” which was probably put into its final written form in the early second century, describes Mary's father Joachim as a wealthy member of one of the Twelve Tribes of Israel. Joachim was deeply grieved, along with his wife Anne, by their childlessness. “He called to mind Abraham,” the early Christian writing says, “that in the last day God gave him a son Isaac.”

Joachim and Anne began to devote themselves to rigorous prayer and fasting, in isolation from one another and from society. They regarded their inability to conceive a child as a surpassing misfortune, and a sign of shame among the tribes of Israel.

As it turned out, however, the couple were to be blessed even more abundantly than Abraham and Sarah. An angel revealed this to Anne when he appeared to her and prophesied that all generations would honor their future child: “The Lord has heard your prayer, and you shall conceive, and shall bring forth; and your seed shall be spoken of in all the world.”

After Mary's birth, according to the Protoevangelium of James, Anne “made a sanctuary” in the infant girl's room, and “allowed nothing common or unclean” on account of the special holiness of the child. The same writing records that when she was one year old, her father “made a great feast, and invited the priests, and the scribes, and the elders, and all the people of Israel.”

“And Joachim brought the child to the priests,” the account continues, “and they blessed her, saying: 'O God of our fathers, bless this child, and give her an everlasting name to be named in all generations' … And he brought her to the chief priests; and they blessed her, saying: 'O God most high, look upon this child, and bless her with the utmost blessing, which shall be forever.'”

The protoevangelium goes on to describe how Mary's parents, along with the temple priests, subsequently decided that she would be offered to God as a consecrated Virgin for the rest of her life, and enter a chaste marriage with the carpenter Joseph.

St. Joachim and St. Anne have been a part of the Church's liturgical calendar for many centuries. Devotion to their memory is particularly strong in the Eastern Catholic churches, where their intercession is invoked by the priest at the end of each Divine Liturgy. The Eastern churches, however, celebrate Sts. Joachim and Anne on a different date, Sept. 9.