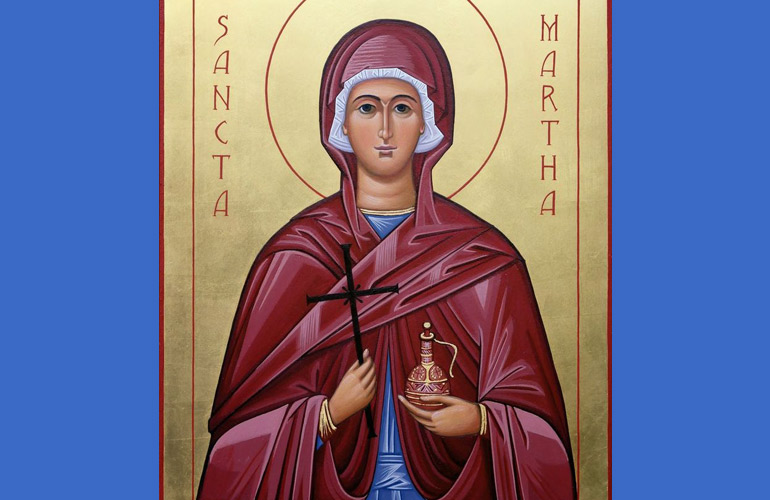 Saint Martha is mentioned in three Gospel passages: Luke 10:38-42, John 11:1-53, and John 12:1-9, and the type of friendship between her and her siblings, Mary and Lazarus, with the Lord Jesus is evident in these passages.

In the gospel of Luke, Martha receives Jesus into her home and worries herself with serving Him, a worry that her sister Mary, who sat beside the Lord's feet "listening to Him speak," doesn't share. Her complaint that her sister is not helping her serve draws a reply from the Lord who says to her, "Martha, Martha, you are anxious and worried about many things. There is need of only one thing. Mary has chosen the better part and it will not be taken from her."

The overanxiousness she displays in serving is put into the right context by Jesus who emphasizes the importance of contemplating Him before all things.

Yet she is seen next in John, outside the tomb of her brother Lazarus who had died four days earlier, as the one who receives the Revelation from the Lord that "I am the resurrection and the life; whoever believes in me, even if he dies, will live, and everyone who lives and believes in me will never die."

When asked by the Lord if she believed this she said to Him, "Yes, Lord. I have come to believe that you are the Messiah, the Son of God, the one who is coming into the world," displaying her great faith which is confirmed by Jesus' subsequent raising of her brother Lazarus from the grave.

In the third and last instance, we see Martha, again in John, at a house in Bethany where Jesus was reclining at table with her brother Lazarus after he had raised him from the dead. During dinner, John's Gospel tells us, "Martha served." She is revealed here performing the same task as when we first saw her, but now her service is infused with her faith, and the brevity of the description suggests the silence and peace in which she serves as opposed to the nervous anxiety she displayed earlier.  Martha, whom we have seen serving, in Luke, and then believing, earlier in John, is now seen expressing her belief in the action of serving the Lord. "Martha served," and in doing so teaches us the way of Christian life.

Saint Martha is the patron of housewives, servants, waiters and cooks.