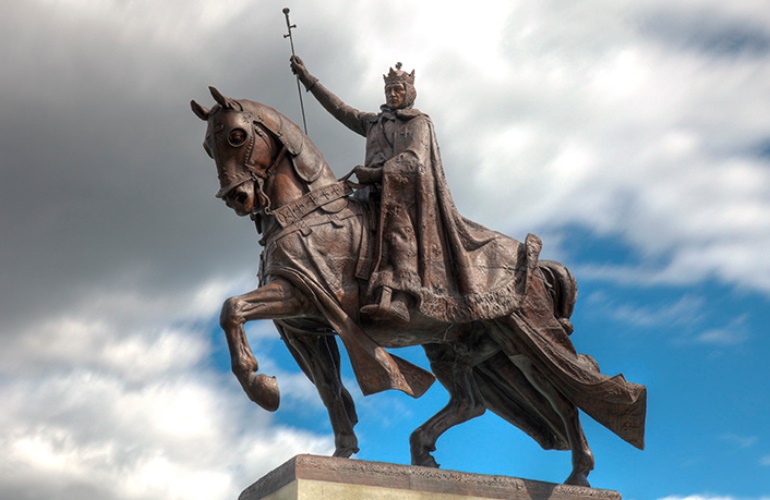 St. Louis was born to King Louis VIII and Blanche of Castile, at Poissy on April 25th 1215. Louis was made King at only 11 years of age, and was the father of 11 children. He led an exemplary life, bearing constantly in mind his mother's words: "I would rather see you dead at my feet than guilty of a mortal sin." His biographers have written of the long hours he spent in prayer, fasting, and penance, without the knowlege of his people.

The French king was an avid lover of justice, who took great measures to ensure that the process of arbitration was carried out properly. All of 13th century Christian Europe willingly looked upon him as an international judge.

He was renowned for his charity. "The peace and blessings of the realm come to us through the poor," he would say. Beggars were fed from his table; he ate their leavings, washed their feet, ministered to the wants of the lepers, and daily fed over one hundred poor. He founded many hospitals and houses: the House of the Felles-Dieu for reformed prostitutes, the Quinze-Vingt for 300 blind men (1254),  as well as hospitals at Pontoise, Vernon, Compiégne.

St. Louis was a patron of architecture. The Sainte Chappelle, an architectural gem, was constructed in his reign as a reliquary for the Crown of Thorns, and it was under his patronage that Robert of Sorbonne founded the "Collège de la Sorbonne," which became the seat of the theological faculty of Paris, the most illustrious seat of learning in the medieval period.

St. Louis died of the plague near Tunis, August 25th, 1270, during the Second Crusade.  He is the patron of masons and builders.