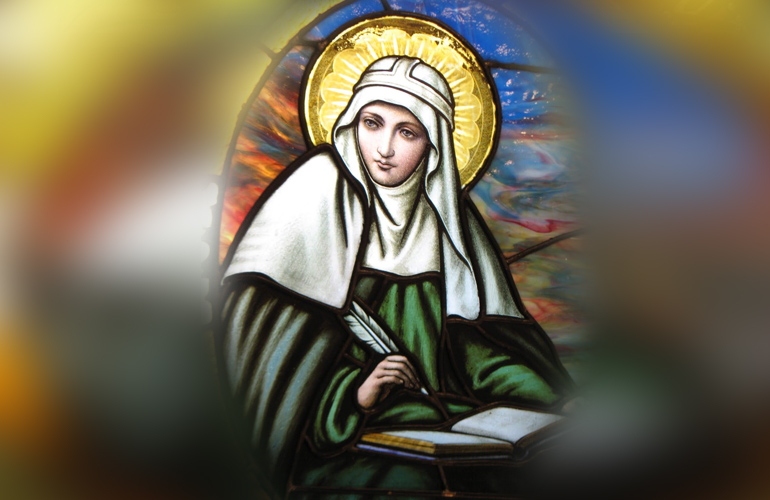 Today, July 23, the Church celebrates the feast day of St. Bridget of Sweden.  Bridget received visions of Christ’s suffering many times throughout her life, and went on to found the order of the Most Holy Savior.

Daughter of Birger Persson, the governor and provincial judge of Uppland, and of Ingeborg Bengtsdotter, Bridget was born in Sweden in 1303. From the time she was a child, she was greatly devoted to the passion of Jesus.

When she was only ten, it is recorded that she had a vision of Jesus on the cross and heard him say, “Look at me, my daughter."

"Who has treated you like this?" cried little Bridget.

Jesus answered, "Those who despise me and refuse my love for them.”  From that moment on, Bridget tried to stop people from offending Jesus.

When she was 14, Bridget married an 18-year old man named Ulf. Like Bridget, Ulf had set his heart on serving God. They had eight children, of whom one was St. Catherine of Sweden. Bridget and Ulf also served the Swedish court, Bridget as the queen's personal maid. Bridget tried to help King Magnus and Queen Blanche lead better lives, however for the most part, they did not listen to her.

All her life, Bridget had marvelous visions and received special messages from God. In obedience to them, she visited many rulers and important people in the Church. She explained humbly what God expected of them.

After her husband died, Bridget put away her rich clothes and lived as a poor nun. Later, in 1346, she began the order of the Most Holy Savior, also known as Bridgettines. She still kept up her own busy life, traveling about doing good everywhere she went. And through all this activity, Jesus continued to reveal many secrets to her, which she received without the least bit of pride.

Shortly before she died, the saint went on a pilgrimage to the Holy Land. At the shrines there, she had visions of what Jesus had said and done in each place.

All St. Bridget's revelations on the sufferings of Jesus were published after her death.

"True wisdom, then, consists in works, not in great talents, which the world admires; for the wise in the world's estimation . . . are the foolish who set at naught the will of God, and know not how to control their passions." --Saint Bridget of Sweden.