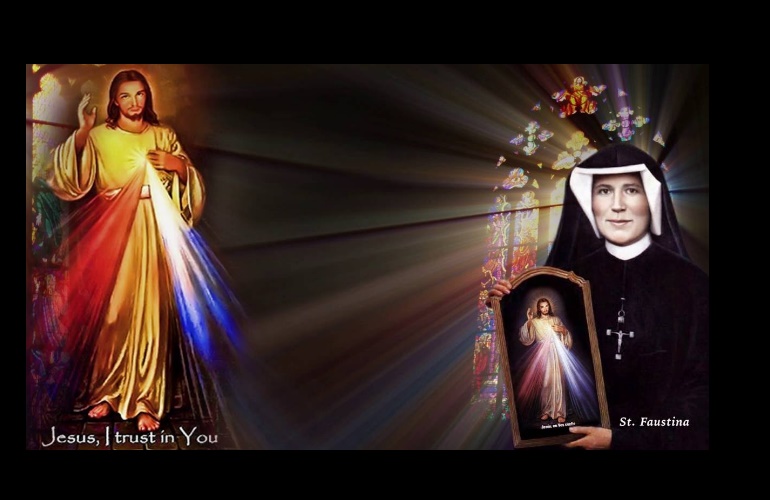 Born in what is now west-central Poland, Helena Kowalska was the third of 10 children. She worked as a housekeeper in three cities before joining the Congregation of the Sisters of Our Lady of Mercy in 1925. She worked as a cook, gardener and porter in three of their houses.

In addition to carrying out her work faithfully, generously serving the needs of the sisters and the local people, Sister Faustina also had a deep interior life. This included receiving revelations from the Lord Jesus, messages that she recorded in her diary at the request of Christ and of her confessors.

At a time when some Catholics had an image of God as such a strict judge that they might be tempted to despair about the possibility of being forgiven, Jesus chose to emphasize his mercy and forgiveness for sins acknowledged and confessed. “I do not want to punish aching mankind,” he once told Saint Faustina, “but I desire to heal it, pressing it to my merciful heart.” The two rays emanating from Christ’s heart, she said, represent the blood and water poured out after Jesus’ death.

Because Sister Maria Faustina knew that the revelations she had already received did not constitute holiness itself, she wrote in her diary: “Neither graces, nor revelations, nor raptures, nor gifts granted to a soul make it perfect, but rather the intimate union of the soul with God. These gifts are merely ornaments of the soul, but constitute neither its essence nor its perfection. My sanctity and perfection consist in the close union of my will with the will of God.”

Sister Maria Faustina died of tuberculosis in Krakow, Poland, on October 5, 1938. Pope John Paul IIbeatified her in 1993, and canonized her seven years later.