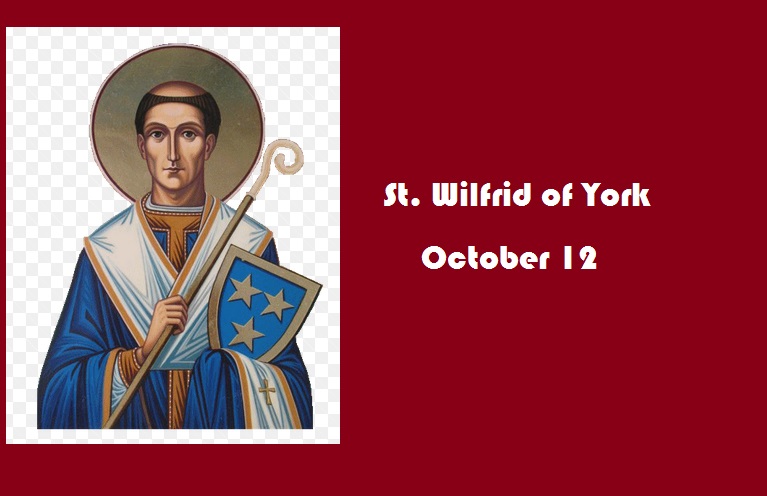 Born the son of a Northumbrian thegn in 634 in Northumbria, England, Wilfrid's mother died when he was a boy, and he never got along with his step-mother. At age 14, partly to escape the miserable family life, he was sent to the court of Oswy, King of Northumbria. He studied at the monastery of Lindisfarne for three years, then accompanied Saint Benedict Biscop to Rome where he studied under archdeacon Boniface.

He stayed in Lyons for three years to study the monastic life, and became a monk, but left during persecutions of the local Christians. He was appointed abbot of the monastery at Ripon for five years, and placed it under the Benedictine Rule. Priest.

He was instrumental in bringing Roman liturgical practice and rules to the region, working influentially at the Synod of Whitby in 664. Bishop Colman and several of his monks, opposing the new practice, withdrew to the north. Wilfrid was chosen as the new bishop and travelled to France for ordination, considering the dissenting northern bishops to be schismatics. He returned to England in 666, nearly dying at the hands of hostile pagans when his ship wrecked on the coast of Sussex.

However, he had taken so long to come back that Saint Chad had been chosen to replace him. Wilfrid retired to the monastery at Ripon and evagelized in Mercia and Kent. In 669 Archbishop Theodore of Canterbury explained to Saint Chad that Wilfrid should have the see; Chad withdrew, and Wilfrid resumed the bishopric.

During his tenure Wilfrid worked to enfoce Roman ritual, founded Benedictine monasteries, and rebuilt the minster of York, all while living a simply and holy life himself. He became embroiled in political discord when he encouraged Queen Etheldrida to move to a convent when she no longer wished to live with her husband, King Ecgfrid.

When Archbishop Theodore subdivided Wilfrid's diocese to reduce his influence, Wilfrid appealed to Rome. Pope Agatho ruled in Wilfrid's favour, and the three intruding bishops were removed. However, when Wilfrid returned to England King Ecgfrid accused him of buying the decision, and imprisoned him at Bambrough then exiled him to Sussex.

He worked as a missionary in heathen Sussex. He reconciled with Archbishop Theodore, who had also been working in Sussex, in 686, and when Aldfrid became king of Northumbria, Theodore insured Wilfrid's return from exile. He served as bishop of Hexham, and then of York again. However, when he tried to consolidate the dioceses again, the king and Theodore opposed him, and he Wilfrid was forced to appeal again to Rome in 704.

Through a series of meetings, synods and rulings, Wilfrid became bishop of Hexham and Ripon, but not York. In the end Wilfrid accepted, deciding that the result of this turmoil was that everyone involved had agreed to the authority and primacy of the Pope and the Vatican, the principle he had fought for all along.

He died in 709 at Oundle, Northhamptonshire, England and is the patron of Ripon, England .