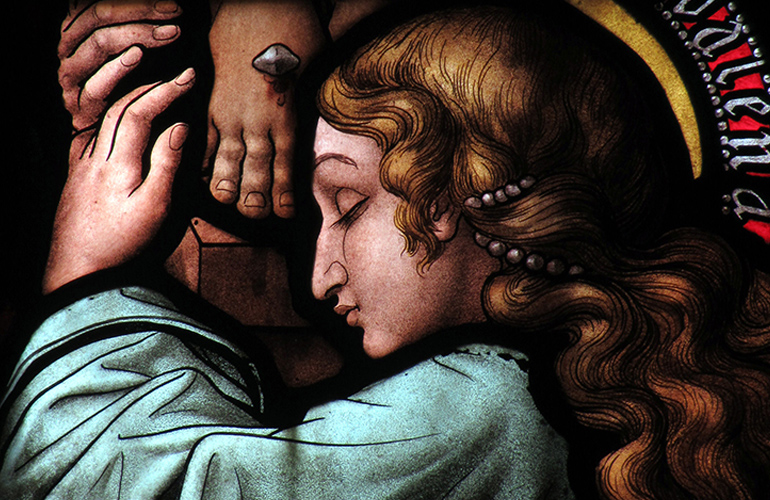 On July 22, the Church celebrates the Feast of St. Mary Magdelene, one of the most prominent women mentioned in the New Testament.

Her name comes from the town of Magdala in Galilee, where she was born. Scripture introduces her as a woman “who had been healed of evil spirits and infirmities: Mary, called Magdalene, from whom seven demons had gone out” (Lk. 8:2).

Some scholars identify Mary Magdalene with the sinful woman who anointed the feet of Christ with oil in the house of Simon the Pharisee (Lk. 7:36-50). Others associate her with Mary, the sister of Martha and Lazarus (Lk. 10:38-42, Jn. 11). Some believe the three figures to be one person, while others believe them to be three distinct individuals.

What the Scriptures make certain about Mary Magdalene is that she was a follower of Christ, who accompanied and ministered to him (Lk. 8:2-3). The Gospels record her as being one of the women present at Christ’s crucifixion.

In addition, she was the first recorded witness of the Resurrection. The Gospels all describe Mary Magdalene going to the tomb on Easter morning. When she saw that the tomb was empty, she stood outside, weeping. Jesus appeared to her and asked her, “Woman, why are you weeping? Whom are you looking for?” (Jn. 20:15)

She did not recognize him, however, and thought he was the gardener, until he said her name, “Mary!” (Jn. 20:16) Upon hearing this, Mary recognized him. She returned to the grieving disciples to announce to them the message of the Resurrection.

Pope Benedict XVI spoke about Mary Magdalene in his address before the Angelus on July 23, 2006. He referred to her as “a disciple of the Lord who plays a lead role in the Gospels.”

The Pope recalled Mary Magdalene’s presence “beneath the Cross” on Good Friday, as well as how “she was to be the one to discover the empty tomb” on Easter morning.

“The story of Mary of Magdala reminds us all of a fundamental truth,” Pope Benedict said. “A disciple of Christ is one who, in the experience of human weakness, has had the humility to ask for his help, has been healed by him and has set out following closely after him, becoming a witness of the power of his merciful love that is stronger than sin and death.”

On June 10, 2016, the liturgical celebration honoring St. Mary Magdalene was raised from a memorial to a feast, putting her on par with the apostles.